Benfleet Yacht Club - Founded in 1922, celebrating our Centenary in 2022

In the early 1920's, Benfleet was a very different place! A village, with less than a thousand residents but three pubs - all of which survive today! After WW1 the attractions of both Benfleet and Canvey as places to retire brought along an increasing number of residents, mostly from the eastern parts of London. Others found that with a one-hour train service to London, it was practicable to live in the country and work in town. So it was that by the 1920's, Benfleet's population had risen to two thousand, and the majority were newcomers.

Benfleet Yacht Club was started in 1922 on the northern bank of Benfleet Creek, adjacent to the railway line and Benfleet Station, by a group of locals from varied backgrounds but with a common interest in "yachting". Meetings were held in the nearby Hoy Public House, which was owned by Harry Phillips, and this family association Benfleet Yacht Club continues today! At this time there was no bridge on to Canvey, only stepping stones, a hard track in the base of the creek, and a rowed ferry boat for when the tide was in.

By 1927 a barge, the Soar, had been purchased by the members and converted into the club headquarters. She was moored next to the station with storage for boats and gear in the arches under the platform (no underpass then!).

In May 1930 construction of an opening bridge was started, which was opened in May 1931. This was to allow the Thames barges bringing building materials for the growing villages to reach the Canvey Supply wharf (where the station bus stop is). Of course, it also gave access to the River Thames for Club members.

The barge HQ began to leak more and more, so in 1935 a deal was done for the ex-Gravesend Port Authority health ship "Hygeia", for the headquarters. She had originally been a two masted schooner moored off Gravesend, however this boat was not built to be grounded on the mud with each tide and, you guessed it, she quickly began to leak and electric pumps had to be installed to combat this.

By this time, the club was becoming popular with both locals and those from further afield - mainly London. The creek was a busy place. Boats were moored along the creek, opposite the station. Dinghies would be pulled up onto the banks of the creek in front of the station. There were a couple of boatyards along the creek where maintenance was undertaken and repairs carried out. Races were taking place around the estuary for yachts and a variety of dinghies were sailed in the creek and beyond. In 1936, Reg Freeman, a yacht designer based locally, was commissioned to design a dinghy to sail and race in Benfleet Creek. The boat was known as a "BOD", the "Benfleet One Design" (see photo below). The plans can be seen today above the staircase in our clubhouse. 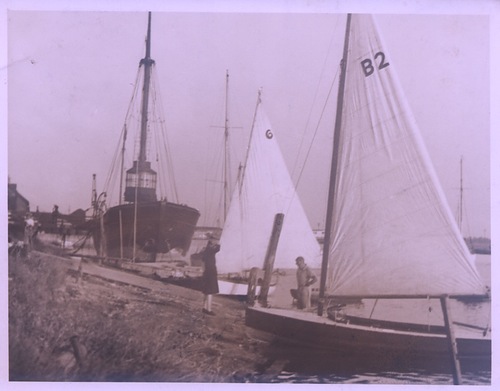 Social sailing for families was becoming popular too. This photograph of two Club families was taken in the late 1930's. During the summer members were in the habit of taking their boats and meeting out on a sandbar in the Thames that appears at low tide - The Ray. Rather than fight for space on the beach, families could have all the fun of sunshine and sea on their own sandbar. Games would be played on the sand and when the tide turned the boats would head for home. Some things never change!!

During WW2 Yachting for pleasure was theoretically banned, but due to the efforts of one member who lived near Benfleet station, Mr Bert Wines, the club was opened as and when needed and was able to keep running. There was a fairly large military and naval presence in the area. Holehaven was the HQ of the Admiralty Thames Patrol and Southend Pier was commissioned by the Navy and named as HMS Leigh. The Commodore invited the senior staff of these organisations to become honorary members of the club, this helped to keep the club running as the bar did very well! 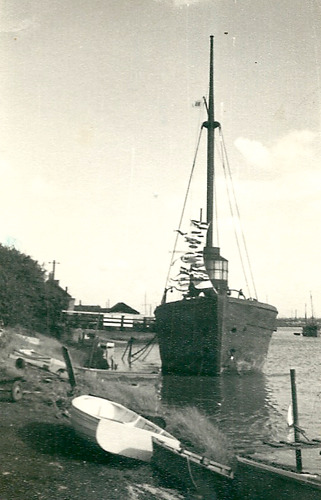 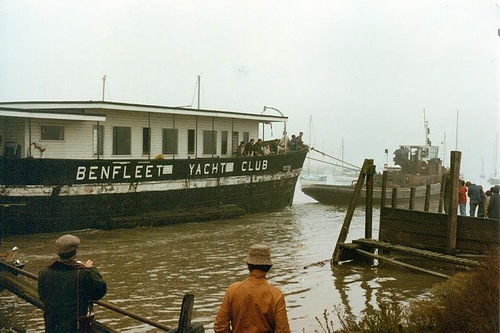 The Hygeia succumbed to the inevitable and was replaced by the newly retired Trinity House "Inner Dowsing Lightship" in 1948. She was built in 1840 and was the oldest surviving wooden lightship afloat, again moored just by the station. She arrived complete with mast and light.

A great deal of work was needed to convert her to a club headquarters, but this was done in stages over many years by members. There were two sections below, with a central staircase. Astern was the main saloon bar with a large cast iron stove in the middle, and forward there was a larger more open area where social functions and meetings were held.

The club grew from strength to strength and in the 1950s was a prominent part of the East Coast yachting community. Members took part in cross channel races in cruisers and several international dinghy sailors honed their skills in the creek!

Benfleet Yacht Club members boat handling skills were tested in the 1953 flood, as recorded in this extract from the police sergeant's report at the time:

"A group of young people from Benfleet Yacht Club helped to rescue and evacuate members of the public from the Canvey Island flood.

Ten members of the South Benfleet Yacht Club were responsible for saving over 60 people from the Sixty Acres and Winter Gardens area of Canvey Island. This area was flooded to a depth of about 5 feet on the north side of the inner sea wall. They rowed their boats from South Benfleet and whilst 8 male members rescued the people in their boats, the two women set up a shelter in an empty house for the old people."

"They carried out their self-appointed task in the face of a bitter wind and a strong current which made their boats practically unmanageable, and they did not stop until they had made certain that every living person had been removed from the flooded bungalows. In their efforts to rescue, the men were forced to enter the water on occasion, to get the people out of their houses. Had it not been for their efforts I am certain that the death roll on this day would have been much greater."

In 1963 the population of Canvey had grown and the access via the single road on & off the Island, which had to contend with the opening bridge and a level crossing, was severely overloaded. Church Creek (which flowed under the station) was blocked off and the present underpass was built. The Club moved a few hundred yards down the creek to the, by now unused, Canvey Supply wharf.

In 1968 the (allegedly second hand) opening bridge was replaced by the present fixed bridge. This necessitated an Act of Parliament to close the creek and the Club was able to get some compensation for loss of access to the river. The clubship was moved to a site on the marsh east of the bridge which had been purchased by the members. The Club continued at the wharf site for a few years using a cabin inside the boatshed as the HQ / bar. The marsh below the bridge was slowly filled and prepared for use with a roadway, car park, water and electricity supplies. The site expansion continued for many years to achieve what we see today.

The lightship was converted to give a deck saloon bar with a larger open bar area down below. But eventually history repeated itself and she started to defeat the best efforts of the members to keep her afloat!

After much discussion and an Extraordinary General Meeting it was agreed to break with tradition and move ashore to a purpose built HQ. In 1984 the present clubhouse was built. Although the main structure was constructed professionally the majority of the work was carried out by members using their many and varied skills. This continues in the improvements made to the HQ and the site facilities that we have now. With members continued help we hope to make another 100 years! 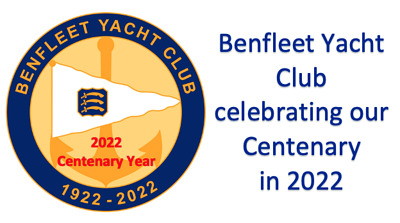 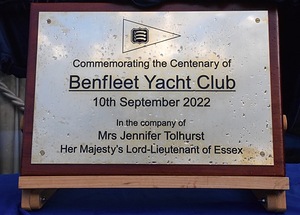 On September 10th 2022, Benfleet Yacht Club celebrated their Centenary. We did this in a very big way, with a full day of activities for all members. Please visit the Centenary page for further details and photographs taken throughout the day. 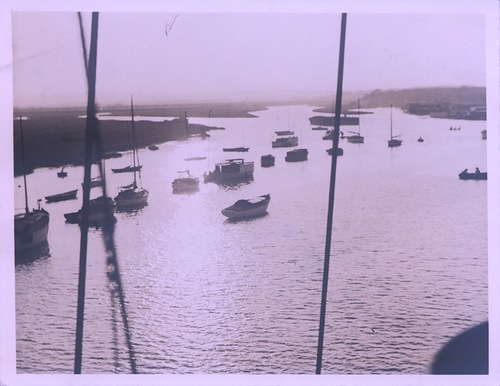