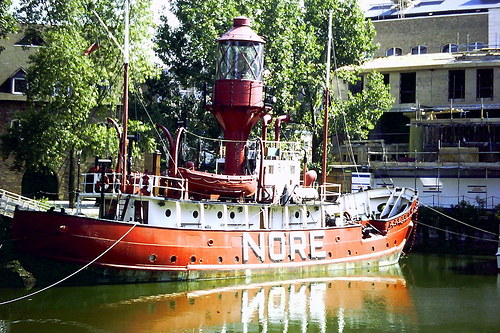 The Nore sands lie in the Thames Estuary and extend between Shoeburyness in the north and Sheerness in the south.


The Nore Lightship, anchored 4 miles southeast of Shoeburyness, was the first to be established in English waters in 1732. The Nore anchorage was much used by the English fleet in the wars of the 17th and 18th centuries. In 1797, Sailors at the Nore mutinied against their conditions, and their leader, Richard Parker, was hanged from the yardarm of his ship.


The Lightship is now replaced by a large navigation buoy.

In the 1920's, Frank Garon, of the well-known Southend based Garon business family, approached the "Interclub" Association of Southend Yacht clubs with the idea of a race round the Nore Light Vessel.

Interclub were not interested, so Mr. Garon, as a member of Benfleet Yacht Club, asked BYC if they would organise it and they agreed.

At first, the race was sailed annually, with the winners from each consecutive three years, racing for a large silver cup. During the war, light vessels were only put on station for conveys and then towed in again. The Nore Light Vessel was moored inside the Shoebury boom (still visible today) and was therefore left on station all the time.

After the war, the race was sailed for "cash" prizes, the silver cup probably having been melted down "for the war effort"!

In the 1950's, Frank Garon was intending to emigrate to Australia and so the Commodore of Benfleet Yacht Club (Will Clarke) asked him, whilst standing on the end of Southend Pier for the Nore Race, if he would donate some money to enable the race to continue. This he readily agreed to.

Frank Garon died within six months of this and his ashes were scattered round the Nore.

Click on the image below to view a short video clip taken during the 1963 Nore Race (courtesy of British Pathe Films).

The Nore Race is now one of the premier and largest yacht races in the South East of England.

The race itself is aimed to attract both a wide variety of boats and peoples interest in sailing. Past competing boats have ranged from small dinghies, such as the Mirror, up to large cruisers. In recent years, we have had the former Americas Cup challenger "Victory", previously owned by Peter De Savory, compete in the race. In terms of people's interest; some go out to win with a fully switched on crew, whilst others, maybe with just husband and wife on board, are content to follow the pack around in a relaxed manner. The Nore Race means different things to different people.

The course is also designed to be of an optimum distance, approximately 20 miles, to consider all competing boat types. It starts from the end of Southend Pier and runs in a clockwise circle around the Thames Estuary; crossing over to the North Kent Coast and passing the wreck of the sunken 2nd World War ammunitions ship "Richard Montgomery" and the mouth of the River Medway. The course returns to Southend Pier for the finish.